There are a number of factors that influence voter choices including:

These choices are what have determined what the voter turnout is going to be.

Posted by Unknown at 8:52 AM No comments:

13.1
Trace the roots of American elections, and distinguish among the four types of elections

United States elections are responsible for most of the political changes in the United States. One might ask why we vote? What is the purpose of citizens voting for senators, presidents, and congressmen? Elections confirm the idea of popular sovereignty, create government accountability, chooses issues and policy priorities, and winner gets mandate (a command indicated by an electorate's votes).  The electorate is any citizen eligible to vote in elections. The threat of elections keeps policy makers concerned with public opinion and keeps promoting ethical behavior which affects the choices and turnout of the electorate.


There are four types of elections:

The most recent recall election was in 2003 when Governor Grey Davis, was replaced with Arnold Schwarzenegger. Recall elections are rare, but general elections and initiatives are held at state and local governments.

Check out Chapters 1&2 Learning Targets!!
Click on the link below!!

Posted by Unknown at 6:08 PM No comments:

Email ThisBlogThis!Share to TwitterShare to FacebookShare to Pinterest
Chapter 3
Learning Target 3.4
Explain how cooperative federalism led to the growth of the national government

The era of dual federalism met its end when the Great Depression hit the United States during the 1930's. There were a series of economic events that led to this tragic time, some examples are: 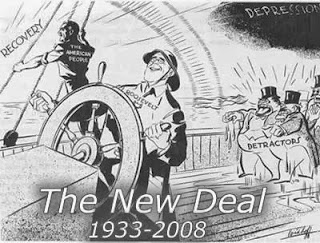 In 1933, the newly elected president FDR, proposed the New Deal. This was a program of "Relief, Recovery, Reform," began in 1933, to bring the US out of the Great Depression. A series of acts passed during the first few weeks of Roosevelt's presidency such as Federal Housing Administration (provided federal financing for new home construction), Civilian Conservation Corps (work relief program for farers and homeowners), Agricultural Adjustment Administration (imposed restrictions on production in agriculture and many industries while also providing subsidies to farmers).

Overall, the New Deal forced all levels of government to work cooperatively together and enlarged scope of the national government. This led to the idea of a "marble cake" instead of a "layer cake". Cooperative federalism is basically that the national and state governments work together as a whole. Having established this new federalism, this increased federal funding for rebuilding the nation. In order for the national government to still protect its citizens it created categorical grants, which are grants that allocated federal funds to states for a specific purpose such as health, welfare, and safety. The Great Society program was a broad attempt to combat poverty and discrimination, and also an example of the use of federal funds.
Posted by Unknown at 6:05 PM No comments:

Email ThisBlogThis!Share to TwitterShare to FacebookShare to Pinterest
Chapter 3
Learning Target 3.3
Describe the emergence and decline of dual federalism

Dual federalism is the belief that having a separate, yet equally powerful levels of government is the best arrangement. Those who believe in this theory typically believe that the national government should not exceed its constitutionally enumerated powers. The competing national and state interests became troublesome when the justices were faced with the controversial topic of slavery. An example of a controversy is the Dred Scott v. Sanford (1857) case concluded that the U.S. Congress lacked the constitutional authority to bar slavery in territories. This decision narrowed the scope of national power, and enhanced the state's instead.

The political debate over the states rose further as the Supreme Court took on more cases, which made Congress use nullification, which is the right of a state to declare void a federal law. This will allow less criticism of the national government. The Civil War changed the way that federalism was viewed, due to the Confederation and aftermath. The states and national government began working on various projects to help re-build including railroads, banking, building, and ports. The movement of the Sixteenth and Seventeenth amendments were the main causes in making dual federalism decline. The 16th amendment stated that the Constitution authorized Congress to enact a national income tax. The revenues taken in by the federal government enhanced its power and ability to enter new policies. The 17th amendment, both ratified in 1913, made senators directly elected by the people, removing their selection from state legislatures. This made states loose their principle protectors in Congress.
Posted by Unknown at 5:11 PM No comments:

Email ThisBlogThis!Share to TwitterShare to FacebookShare to Pinterest
Chapter 3
Learning Target 3.2
Determine the impact of the Marshall court on federalism

The Supreme court, known as the Marshall court during 1801-1835, performed important roles defining the balance of power between the national government and state governments. There were some important cases that happened during John Marshall's advisory as Chief Justice such as McCulloh v. Maryland, Gibbons v. Ogden, and Marbury v. Madison. Each case brought up important ideas pertaining to the Constitution and government.

The case of Marbury v. Madison (1803), the Supreme Court significantly altered the meaning of various provisions of constitution. Facts: It was an attempt by the Federalists to take control of the federal judiciary before Thomas Jefferson took office, so Marbury applied directly to the Supreme Court for a writ of mandamus (order that commands courts from carrying but municipal decisions) to compel Jefferson to deliver the commission. The issues of the case included: Does Marbury have a right to the commission? Does the law grant Marbury a remedy? Does the Court have original jurisdiction to issue writs of mandamus? Yes, granting commission takes place when Constitutional power has been exercised. Yes, the law grants Marbury a remedy due to civil liberties. No, to enable this issue, it must be shown to be an exercise of jurisdiction. The end result- Application of writ of mandamus was denied, and Marbury didn't get the commission's.

Posted by Unknown at 8:59 AM No comments:

Chapter 3
Learning Target 3.1
Trace the roots of the federal system and the Constitution's allocation of governmental powers Federalism is a system of government were the state and national governments share power and derive all authority from it's people. This system was designed to be a remedy for most of the problems with the Articles of Confederation. Under the Constitution, the national government has enumerated and implied powers. Enumerated powers, as stated in Article 1 section 8, are powers given to the government according to constitutional restrictions, whereas implied powers are authorized from the Constitution, aren't directly stated, but implied. A good example of an implied power would be the interstate highway system. The Constitution does not directly state that the national government is able to build such an elaborate highway system, it only says that the Congress can have power to regulate commerce between foreign nations, Indian tribes, and among states.

A few more relations under the Constitution have to do with the full faith and credit clause, privileges and immunities clause, extradition clause, and interstate compacts. The full faith and credit clause ensures that all contracts made in one state will be binding and enforceable in any other state. This is similar to the privileges and immunities clause, which says that citizens of each state are afforded the same rights as citizens of all other states. An example of the full faith and credit clause is being able to drive into any state, and still have a valid drivers license even if it isn't the state it's from. Interstate compacts and the extradition clause are similar as well because the extradition clause requires states to return criminals to the states where they have been convicted or are to stand trial if they flee and interstate compacts are simply contracts between states that carry out the force of their laws. If a criminal, for example, committed a crime in Georgia, but fled to Ohio, if he was found in Ohio, he would be sent back to Georgia and receive that state's punishment. Overall, these clauses and powers listed in the Constitution lay the groundwork for the Supreme Court to be the final decision-maker about all disagreements between states.